Liz Ridgway gained a degree in Art History with Fine Art at Cambridgeshire College of Arts in 1985, and began to exhibit professionally in 1997. She was awarded first prize in the Tabernacl Art Prize from the Museum of Modern Art Wales and The Green City Art Prize in Birmingham. The Birming award resulted in the painting being purchased by the city, for the Mayor's parlour.

In 2001, she was elected Member of the Royal Birmingham Society of Artists, and exhibited with the NEAC in London for several years. She has exhibited widely in mixed and solo shows, with galleries in the United Kingdom, and currently lives and works in France.

Recently her image 'The Housemaid' was published as a book cover for Hector Tizon's 'La Mujer de Strasser'.

“I discover as much as I plan, as when I paint, uncovering a subtle narrative behind the figure and setting. I want my work to invite the viewer to contemplate the story and emotion of the piece, which not only changes from viewer to viewer, but can also develop over time.” 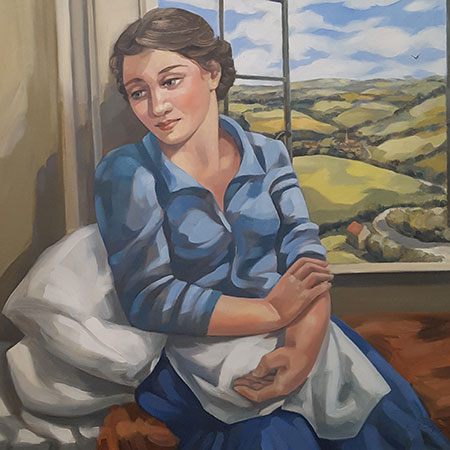 The Visit by Liz Ridgway