Elected an RE associate in 2016 Stephen Lawlor was born in Dublin in 1958. He is a painter & printmaker. He lectured at IADT, in printmaking and drawing 1991-97 and was chairman of Graphic Studio Dublin Print Workshop 2000-05. He was one of the founder members of the International Academic Printmaking Alliance at the Central Academy of Fine Arts in Beijing China in September 2016. He was a jury member for Masters Printmaking 2017 & 2018 at the Royal Academy of Fine Arts Antwerp and was elected a member of Aosdána in 2018. 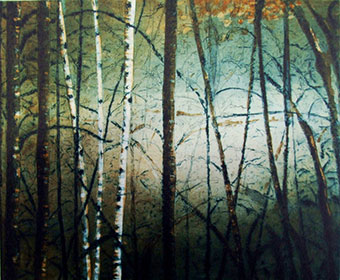